A commie witch-hunt, a dwell abdication and a army invasion of sport: 100 years of the BBC, half two | Tv & radio 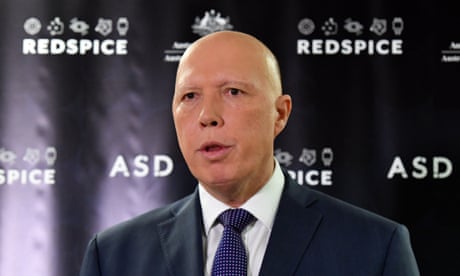 The Morrison government has axed a $1.3bn program to buy armed drones, redirecting the money towards the “Redspice” cybersecurity package that the Coalition trumpeted as a centrepiece of the defence budget.

As political parties prepare for the possibility of the election campaign formally beginning within days, officials revealed the government was cancelling a project it previously hailed as a “cutting-edge armed remotely-piloted aircraft system”.

The government also confirmed it was yet to decide on the future of a Chinese company’s lease over the Port of Darwin, describing last year’s review as a “live process” that was not yet complete.

The Coalition is known to be keen to campaign on its national security credentials and it used Tuesday’s budget to promote what it called “the biggest ever investment in Australia’s cyber preparedness”.

Australia’s electronic spy agency, the Australian Signals Directorate, will double in size and ramp up its ability to launch its own offensive cyber operations as part of a $10bn pledge dubbed Redspice, short for “resilience, effects, defence, space, intelligence, cyber and enablers”.

But the funding is spread over 10 years and only $4.2bn will be spent in the first four-year budget cycle. Given the government is partly offsetting the package with savings from other parts of the defence portfolio, the cyber pledge is worth only $588.7m in new money in the first four years.

Defence officials confirmed at a Senate estimates hearing on Friday that the Redspice-related savings included cancelling the SkyGuardian program, under which Australia had planned to acquire up to 12 armed drones which could also be used for surveillance.

The government had previously said it would try to maximise Australian industry content in that acquisition.

The then defence minister, Linda Reynolds, said in 2019: “Cutting-edge technology of this kind, with advanced sensors and systems, would complement advanced aircraft such as the F-35 Joint Strike Fighter and ensure that Australian Defence Force maintains state-of-the-art capability.”

So far, just $10m has been spent on the envisaged $1.3bn SkyGuardian program.

The acting secretary of the Department of Defence, Matt Yannopoulos, said the cancellation of the program was made “by government as part of the decision for Redspice”.

Asked whether the cancellation had been previously announced, Yannopoulos said: “No, I did that here – 20 minutes ago.”

Pressed on why it was only revealed during Senate estimates, he added: “To answer a direct question from Senator [Penny] Wong on what was adjusted in the integrated investment program to support Redspice.”

Officials said there were also some cost offsets from within the ASD’s own programs.

Labor said the cancellation would “reverberate around Australian defence industry” and “demonstrates this government doesn’t care about Australian manufacturing”.

Labor’s defence spokesperson, Brendan O’Connor, said: “How on earth can Australians trust this government to deliver what they promise when they hide unpopular decisions?”

O’Connor also claimed that “up to $5.5bn will be wasted on a non-existent fleet of submarines”.

On Friday, defence officials were unable to shed light on the likely costs of cancelling the French submarine contract, but said they expected it would be able to be covered within existing budgeted amounts.

Defence budget papers say $5.4bn is the total approved project expenditure for the Future Submarine Mobilisation and Design. That includes estimated total spending up to 30 June 2022 of $3.2bn and a further $494m in the 2022-23 financial year.

Officials told Friday’s hearing that the attack-class submarine program had so far cost $2.5bn, up to the end of January 2022.

But they said the figures for the program outlined in Tuesday’s budget were as originally earmarked – prior to the cancellation – because “we haven’t determined what the final cost is”. Talks with the French company Naval Group are continuing.

The Senate hearing also scrutinised the government’s plans for new port infrastructure in the Northern Territory, amid speculation the Coalition may campaign on the matter during the election.

The deputy prime minister, Barnaby Joyce, said on budget night that the government would invest “$1.5bn to build new port infrastructure, such as a wharf, an offloading facility and dredging of the shipping channel, to boost the region’s importing and exporting ability”.

Defence officials confirmed they have been in talks with counterparts from the infrastructure department, but noted that the Northern Territory had been promoting plans for the trade-focused “Middle Arm Sustainable Development Precinct” for some time.

The Northern Territory’s then-Country Liberal party government granted a 99-year lease over the Port of Darwin to the Chinese company Landbridge Group, under a controversial 2015 agreement. The federal government announced a review on national security grounds last year.

The Australian newspaper reported in late December that Defence’s review had found there were no national security grounds sufficient to recommend a government intervention to overturn the controversial lease.

The foreign minister, Marise Payne, said on Friday: “I have no information on the genesis of that media speculation. I have information and advice which indicates to me that the review is still in process. So I would say that the speculation is incorrect.”

The article in the Australian had noted the government was still reviewing the matter, but speculated that the position of the Department of Defence “makes any decision to overturn the port lease more politically challenging”.

Peter Tesch, a deputy secretary of the Department of Defence, told the hearing his agency had “considered the implications for defence” and provided its judgment, “but the process is not entirely within the remit of Defence”.

He said other agencies and departments were also involved and it was still “a live process”.

Guardian Australia has previously reported the government was considering options that went beyond the binary choice of keeping or scrapping the lease. That could include imposing additional requirements on the operator, Landbridge Group, under critical infrastructure laws.

Landbridge said last year the company had “acquired the lease to Darwin Port in good faith following a transparent process in 2015” and was willing to assist any review.

‘I favored practically all of it’: Guardian readers react to Starmer’s Labour convention speech | Keir Starmer